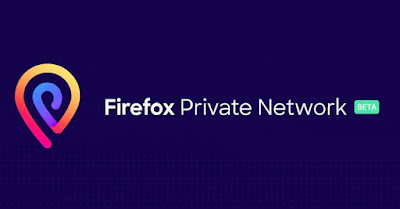 Mozilla officially launched a new VPN service, called Firefox Private Network, as a browser extension that limits what websites and advertisers track about you and also encrypts your online activity.

Firefox Private Network service is currently in beta version and available only to desktop users in the United States (U.S) as part of Mozilla's "Firefox Test Pilot" program that lets users try out new features before they were officially released.

The Firefox Test Pilot program was first launched by the Mozilla three years ago but was shut down in January this year. After that, the company decided to bring the program back but with some changes.

Marissa Wood, vice president of product at Mozilla said that the differences with the newly relaunched Test Pilot program are that these products and services may be outside the Firefox browser, and will be far more polished.

The Firefox Private Network (FPN) is an extension that provides a secure, encrypted path to the web to protect your connection and your personal information anywhere and everywhere you use your Firefox browser.

If you're connecting to a website that doesn't use HTTPS secure connections, the Firefox Private Network will make it impossible for other users on the same Wi-Fi network to see what you're doing. The service also hides your IP address, which makes it harder for web trackers and advertisers to track your browsing history.

Like any other VPN service, Firefox Private Network creates a private tunnel through a proxy to the destination website and also hides your IP address from third-party online trackers and protect your personal information, like the website you visit and your financial information, when using public Wi-Fi.

The Firefox Private Network relies on a proxy server named Cloudflare, so traffic from an individual's browser will be encrypted and sent from the browser to a Cloudflare data center and then to the destination website.

The configuration requires users to trust Cloudflare's network, one of the larger content delivery networks (CDN) in the world. In a privacy statement about the Firefox Private Network, Cloudflare officials said that for each request made form the extension, Cloudflare will see the source and destination IP addresses, and also the source and destination port numbers. That data will be deleted within 24 hours after each individual request.

Once installed, the extension will add a toggle on the Firefox toolbar for enabling or disabling the VPN feature.

Whenever the Firefox Private Network extension is active, the browser will establish a secure connection to the nearest Cloudflare data center and the Cloudflare proxy will route your web traffic to the requested website through the Cloudflare network, which means that visited websites can't see the user's true IP address or location. 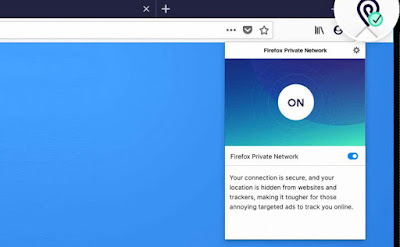 If the user logs out or connections drop out, the user will get a prompt that the VPN extension needs attention. 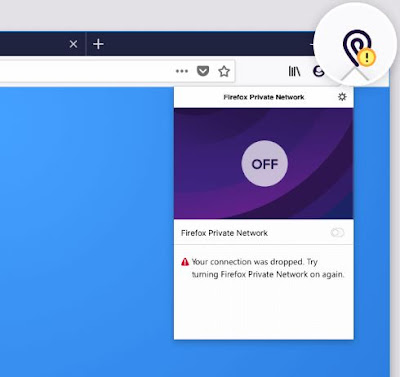 Firefox Private Network extension currently works only on desktops, but it's expected to be available for mobile users as well, once it leaves beta version.

Although the Firefox Private Network service is currently free for all, Mozilla hinted that the company is exploring possible pricing options for the service in the future to keep it self-sustainable.

For now, if you have a Firefox account and live in the United States, you can test the Firefox VPN service for free by signing up on the Firefox Private Network website.

Firefox is aiming to present itself as a leader in internet security and privacy in a time of well-publicized internet scandals and controversies. Mozilla has partnered with ProtonVPN in the past and launched a number of privacy features, including a Facebook Container add-on that blocks Facebook from your web browsing activity and Firefox 69, which blocks third-party tracking cookies and crypto mining by default.

The design of Firefox extension, however, looks to be inspired by common VPN apps and browser extensions, with a simple toggle button and a drop-down screen in which the user can give one-click protection.

But the Firefox Private Network will still be very useful when your laptop is using a free Wi-Fi network in a public place, such as in a coffee shop or an airport waiting for a lounge.

I hope you find useful information in this article. If you have any questions related to Firefox Private Network then please mention in the comments section and I will get back to you and stay tuned with my blog to learn interesting things related to cybersecurity and hacking.